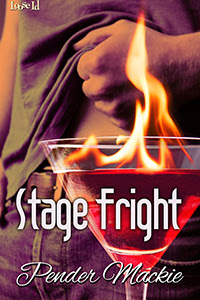 After six months dancing in a Las Vegas all-male revue, Jesse Snowe is used to being groped by enthusiastic females, but he's more interested in Val, the sexy new bartender. Jesse's tired of the closet, but when he thinks of coming out he gets stage fright. The thought of telling his fellow dancers he's gay makes his palms sweat and his heart race and not in a good way. Dating Val under the watchful eyes of the dance captain could reveal Jesse's secret and might be more of a gamble than Jesse's willing to take.   For Val Tremain the glamor of Vegas is wearing thin. He's even less enamored with his new job, but knowing he'll see Jesse's beautiful body makes it easier to go to work. When Jesse hints he's interested Val can't believe his luck. But Jesse's latest dance routine encourages a little too much audience participation and Val struggles with jealousy.   Jesse knows his job's hard on their relationship and being closeted doesn't help. Strangers slap his butt every night, yet he's afraid to touch his lover in public. If he wants this relationship to work Jesse may have to reveal more than just his body.

Available from: Loose Id Amazon and All Romance Ebooks (ARe)

"STAGE FRIGHT is a love-conquers-all story in which desire, honesty, and communication combat jealousy, secrets, and fear. What really roped me in was the strength that both characters displayed when they felt like their happiness was truly being threatened."
Lynn, The Romance Reviews

"Stage Fright is a sexy, fast-paced book with two interesting and likeable characters that intrigued me from the very first page. If you are looking for a quick and provocative read, then Stage Fright is definitely something to consider! Recommended!
Gabbi, Top 2 Bottom Reviews

New comments are not allowed.