Vicktor Alexander - In the Beginning Blog Tour and Giveaway

Today, fellow author Vicktor Alexander's stopping by to showcase his new paranormal romance, The Beginning. Check it out, and don't forget the giveaway at the bottom of the post.

1. At the beginning of creation the Supreme Beings created seven men, crafted of the dirt, the air, and the very breath of the Holy Ones. 2. These seven men chose for themselves a mate. 3. One each. Adam chose Eve, a woman whose envious nature and thirst for knowledge of all things led to all seven men and their mates being cursed. 4. It became known as the Great Disobedience and cause all seven men to be cast out of Paradise and cursed. 5. The greatest curse of all fell upon Adam and his chosen mate, as the men forgot that they were able to give birth and the women forgot that they were able impregnate their mates. 6. Though the other men’s curses were just as severe, the requirement to hide their true natures from Adam and Eve’s descendants, and the driving need to search for their mates, without the assurance of ever finding them, it was far and away Adam and Eve whose curse was the harshest.
7. This is the history of the world. 8. The laws, governing bodies, and other information needed to understand a world that we all live in but that few, if any of us, are fully aware of. 9. This is the truth. 10. This is reality.

In The Beginning Ronny finds a book titled, The Real Holy Bible, and contained within it is the true story of creation, the history of man, the history of the world and of paranormals. The above is a portion of that Bible.

When I started writing the book I asked myself if I wanted to write an actual Bible. After I woke up just from thinking about it, I realized that I could write portions of it to either include in the series, or just for me to refer back to as I wrote. It essentially became a part of the world building Bible and I forgot about putting it into the book, but I always thought it was cool and I never actually forgot about it. There were certain things I’d written that, to me, sounded as if they could have come from a Bible, and still I had nowhere to put them in the book and so, I saved them, knowing that the opportunity would present itself. And it did. With all of you, during this tour, which I’m very happy about.

When the Great Disobedience happened, there were many curses that were given. Eve and all female humans would suffer pain during childbirth and have a monthly cycle (yes, ladies, according to the Bible, you can blame Eve for that). And because of Adam’s disobedience “sin and death would enter the world and man would be forced to work the land.” One of the things that also happened, but few, if any, pastors talk about is the fact that the sons and daughters of Adam and Eve were no longer able to communicate with animals. Remember how Eve and Adam spoke to the serpent in the garden and it didn’t shock either one of them?

But Adam, Asilion, Atolium, Avus, Axilum, Azon, and Awheybus’s guilt prevented them from speaking to the Supreme Being, their father and creator for a long time and as such their children and their children’s children began to draw away from him. And as such they were unaware that the laws and restrictions that they [the paranormals] put upon themselves with their laws were preventing them from discovering their own truths because the Supreme Being in his infinite wisdom created them all in a certain direction:

Déf̱teros(Taken from The Real Holy Bible)

1. At the Creation only Adam chose a woman as his mate, his brothers all chose to mate with men. 2. This set a precedent for many matings following. 3. The descendants of Adam chose heterosexuality as the norm, whereas those who descended of Asilion, Atolium, Avus, Axilum, Azon, and Awheybus tended to mate with men, or the women mated with other women.
4. However, the death of the ancestors of the shifter race and their mates caused many to feel as though the Supreme Being was bringing judgment, by way of his sister-in-law, Judgment, to punish them for their same-sex pairings. 5. And while there were those who had to mate with men in order to continue their line, for others the practice of homosexuality was outlawed. 6. More than that anyone caught engaging in such an action was immediately put to death. 7. This is where the stoning of homosexuals in Biblical times came into play, for it was not the Sons of Adam who started casting the first stone but the sons of Adam’s brothers who had done so.
8. Homosexuality continued, however, though only in secret and even those whose mate was a male, much less a male descended of Adam, those matings were never completed for the Elders had instilled a deep fear within the entire paranormal community that the moment someone mated someone of the same sex it would bring destruction to their world.

Ronny and Cole are not going to have an easy time of it, and there’s so much more for Ronny to discover as he continues to read more of The Real Holy Bible.
Since we’re talking ancient history here, in the comments below tell me what you think is the most interesting event to have happened in history.

Ronny Parker has always been aware that there was more to life outside of his Harlem apartment. When he goes to work one morning at Starbucks, he finds himself coming face to face with a reality that he was not prepared for. He finds himself the eyewitness to a fight between two shifters, a wolf and a lion, one of which bites Ronny and calls him “mate.” When Ronny wakes up the next morning, he finds himself thrust into a world neither his family, nor his teachers, ever taught him about and he does the only thing he can do. He starts to investigate. 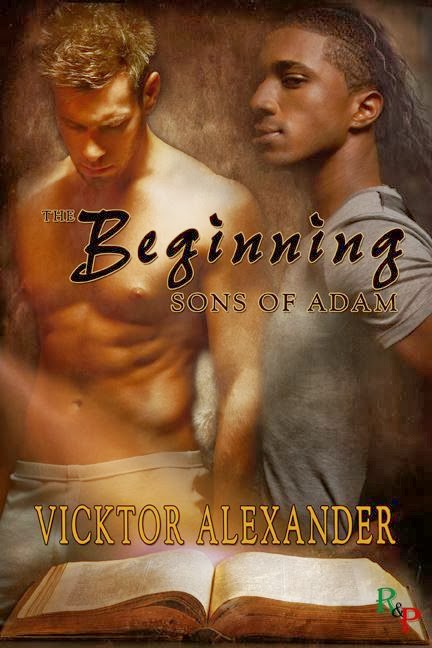 Cole Tronk has been taught from an early age that he is never to mate a human, never reveal his true nature to a human, and that he cannot be gay. But when he gets into a fight with his oldest friend outside of a Starbucks and finds himself smelling the most intoxicating scent ever, he throws all of those rules out of the window. Before long, Cole and his mate, Ronny, are on the run from the governing body of the paranormals, humans who have now discovered that paranormals, magicks, and supernaturals exist, and someone from Ronny’s past who is determined to kill them both.

Along the way, Cole and Ronny meet up with a group of paranormals, magicks, and supernaturals who are also gay, and who are researching the true history of the world and creation. What they find will not only change their lives, but the entire world and the future. Will Ronny and Cole’s mating survive all of these obstacles? When a millennia-old lie comes back to bite them in the ass, will Ronny and Cole be able to deal with the consequences?

The Beginning is now available from Rooster & Pig Publishing: http://www.roosterandpigpublishing.com/new-releases and will soon be available from third-party sellers online.

Posted by Pender Mackie at 9:00 PM