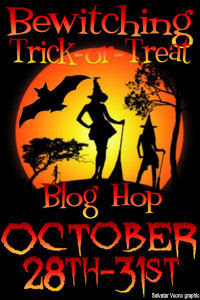 Welcome to the next stop on the Bewitching Trick-or-Treat Blog Hop.

As part of the blog hop I'm holding a contest and giving away a PDF copy of my latest ebook, Right Street, Wrong House, available from Silver Publishing on October, 29th.

All you have to do for a chance to win is visit this blog before midnight (PST) on Oct 31st and leave a comment. Don't forget to include your email address.

If you'd like an extra chance to win, go to my Facebook page — the link is on the right-hand side of my blog — and click on the "like" button. (Or not. It's up to you.)

To continue trick-or-treating click  here to go to the list of blog-hop participants. There's over 100 authors participating in this monster-sized Halloween blog-hop. Each author is giving something away so be sure to check them out for a chance to win a treat.
Posted by Pender Mackie at 12:01 AM 25 comments

October 29th, is a big day for me. It's the release day for Right Street, Wrong House, my latest ebook. I think it came in around 10,000 words so it's really a long, short story. :)

The cover is amazing. Very creepy and sexy. Now there's two adjectives I never thought I'd use at the same time. LOL 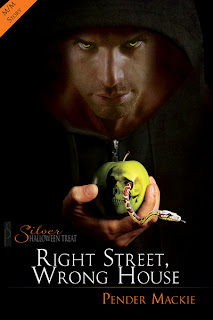 
Lewis goes to a Halloween party to meet someone new and get over his feelings for his friend Dylan. At the party, Lewis discovers the real reason Dylan holds himself back. But Lewis has secrets too and they’re more compatible than Dylan thinks.
Excerpt:
Lewis looked at himself in the mirror. He was showered and shaved and wore a clean, neatly pressed golf shirt and jeans. He frowned at his reflection, frustrated. He looked so damned…nice.
Except for his sandy blond hair, which was a little too long, he looked like the typical boy-next-door. Maybe he shouldn't have shaved, but he didn't have enough facial hair to pull off the rugged look. He tried a sexy smile then grimaced. He'd only managed to look pleasant.
Lewis pulled the golf shirt over his head and put on a tight, silky black t-shirt, enjoying the sensuous brush of the fabric against his skin and nipples. He swapped the comfortable jeans for a pair that was much more form-fitting. The outfit was new and not a style he usually wore, but he was trying to make a statement.
With his blue eyes and wholesome, clean-cut looks he still looked like the kind of guy that would help his neighbors carry their groceries, but at least he didn't look like he'd forgotten his pocket protector at the office.
His cell phone buzzed. Lewis grabbed the phone from his dresser and checked the message.
Where are u? U are missing all the fun.
Lewis typed rapidly. On my way.
He took one last look at his reflection then headed to the kitchen to grab the cookies he'd made for the party.
Tonight's Halloween party was being hosted by a coworker's friend. Lewis had purposely waited 'til the party had started before leaving home. That way, his coworker Rob, the only other guest he knew, would already be there. Thank God costumes were optional. If he'd had to dress up in a costume he wouldn't have gone.
He wasn't shy. His dad always said he could talk the hind leg off a donkey—whatever the hell that meant—but he didn't normally go to parties. Hanging around some stranger's house, watching people getting drunk and acting stupid wasn't his thing, but tonight was different.
Tonight he would go to the party and if he saw someone interesting, he was going to flirt.
Rob had told him everyone was bringing snacks and that there'd be soft drinks provided, but if he wanted alcohol he should bring his own.
Lewis had considered taking some beer, but he'd decided to stick to soft drinks. When it came to alcohol he was a lightweight, plus he was driving.
He hadn't been sure what to bring for snacks so he'd made sugar cookies and decorated them with orange and black icing. He'd taken some to work and they'd been a big hit at the office. His best friend Dylan had eaten three or four, one right after the other.
Lewis laid the cookies on a large plastic plate shaped like a pumpkin. He frowned as he wrapped them with cling wrap. Dylan was the reason he'd agreed to go to the stupid party in the first place, damn it.
He'd known Dylan had been invited, but after Lewis had already accepted, he'd found out Dylan had other plans and couldn't make it.
He wondered what Dylan was doing instead. He'd asked when they were eating lunch in the break room, but Dylan had looked at Lewis, and shrugged. "Just stuff."
Lewis had been frustrated but he'd known he wouldn't get anything else out of him. Even though they were best friends, Dylan could be secretive.
"Come on, Dylan. I already said I'd go and if you don't come too, I won't know anyone but Rob," he'd complained.
"Oh, please. You make friends everywhere you go. Within half an hour you'll be on everyone's Christmas card list."
Lewis had rolled his eyes. "No one has Christmas card lists anymore."
Dylan had thrown his balled-up napkin at him.
Lewis grumbled to himself as he grabbed the cookies and his keys from the kitchen counter. He was disappointed Dylan wasn't going to be there, but if he had some place he'd rather be than at the Halloween party with Lewis, that was fine. Lewis squared his shoulders. In fact, that was all the more reason to go.
It was time to meet some new people and try to get over his feelings for Dylan. They'd known each other for six years, but no matter what he did or said, Dylan refused to see him as anything other than a good friend.
Buy Link for Right Street, Wrong House

RSWH's release is just in time for me to give a PDF copy away as my prize in Drea Becraft's, Bewitching Trick-or-Treat Blog Hop.

There lots of author's participating in the blog hop and each one of them has promised to give away a prize — maybe a book, a gift certificate, Tootsie Pops, who knows? (I love those things though I always seem to cut my tongue on them.)
So be sure to pop by between Oct 28 and Oct 31 for your chance to win.
Happy Halloween.
Posted by Pender Mackie at 4:14 PM 0 comments 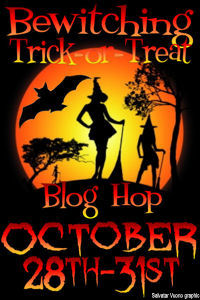 I wasn't able to participate in the Silver Flash this week. I've been getting ready for the release of my Halloween story Right Street, Wrong House, available October 29th.  Check out the cover on the left-hand side of my blog. Isn't it awesome?

The release date ties in quite nicely with Drea Becraft's giant Bewitching Trick-or-Treat Blog Hop. As I'm one of the participating authors, I'll be giving away a copy of  Right Street, Wrong House as part of the fun. So be sure to stop by between October 28th and 31st. I'll post more details on the 28th.

In the meantime, for a list of the 101 participating authors (each one offering a prize) click here. 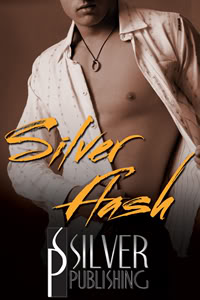 This week’s choices were from prompt diva, Freddy McKay:

and the alternative from flash guru, Ryssa: Use the following elements in your story:  knitting needle, motorcycle, dripping paint
Personally, I liked Freddy's second prompt. It gave me a chance to write something a little darker, though it was a challenge to keep within the 1000 word minimum and still wrap the piece up. Hope you enjoy.

I had time to participate in Victoria's Sunday Snog this week. This is an excerpt from my free read, Dog Days of Summer, written for the Goodreads M/M Romance group's Hot Summer Days Anthology.

Dog Days of Summer Free Read
Blurb:
Levi’s not the relationship type. He’s never been on a date, though he’s had plenty of hook-ups. But since he became the owner of a young dog, he doesn’t have time for either.
Shea’s not looking for the right man. He’s grieving for his yellow Lab.
But all it takes to bring them together is one energetic young dog.
Excerpt:
Levi covered Shea’s mouth with his own. Shea made a surprised sound but he didn’t pull away. Levi went on kissing Shea, enjoying the feel of warm, soft lips. He hadn’t been sure this was the right move, but Shea put a hand on Levi’s thigh and kissed him back, small open-mouthed kisses on his upper lip, the corner of his mouth. Levi put his hands under Shea’s arms and hauled him up onto the couch.
“Oh.” Shea blinked at him, his eyes wide and dark, the pupils dilated. Levi could feel Shea’s heartbeat under his hand, thumping away against his ribs. Shea licked his lips, a quick unconscious action.
“This okay?” Levi asked.
Shea’s gazed dropped to Levi’s mouth and he flushed. “Yeah.”
Levi leaned in. Shea tilted his chin and closed his eyes, his eyelashes dark crescents against his cheeks. Somehow it seemed such a trusting gesture. It reminded Levi that he wasn’t in some dark, smoky club making out with a nameless stranger. Even as he touched his tongue to the seam of Shea’s lips he wondered if he was going too fast for the other man, but Shea opened to him immediately.
Levi kissed him gently. Shea tasted of oranges; tart and sweet and a very nice change from booze and cigarettes. In the air-conditioned room his skin felt warm through the thin cotton of his shirt and he smelled clean, like soap or shampoo.
Levi slid his hands down to Shea’s hips. He pulled him closer then eased him down and back. Shea went with the movement, his hands stroking Levi’s biceps. He pushed up Shea’s shirt and rubbed the pads of his thumbs over Shea’s nipples. Shea moaned into Levi’s mouth and his nipples contracted to hard points under Levi’s teasing touch.
“Feels good, hmm?” Levi trailed his mouth down Shea’s chest, the body under his hands and lips smooth and firm.
He nipped at Shea’s flesh and scraped his teeth over those small, sensitive nubs. Levi worked the fly of Shea’s shorts and gently bit down on one diamond-hard nipple.
Shea gasped and arched under him. Levi used Shea’s movement to tug his shorts and briefs down. He looked down at Shea’s erection: beautiful.

For more snogging click here: http://www.victoriablisse.co.uk/blog/sunday-snog
Posted by Pender Mackie at 9:41 AM 1 comments