Thought I'd participate in Victoria Blisse's Sunday Snog. Here's a kissing scene from my M/M romance, Scent of Attraction. It takes place between Shawn and Graham in Shawn's tiny kitchen. 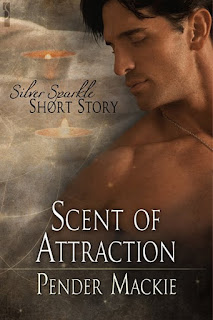 Shawn straightened and turned. Graham was leaning against the opposite counter, less than an arm's length away. Shawn's foot tangled in Graham's, and he let out a surprised yelp, struggling not to fall. Graham moved quickly, grabbing him by the upper arms, keeping him upright.
They were even closer now; Graham's hands hot through the sleeves of his t-shirt. He looked up, meeting Shawn's eyes and gave his arms a squeeze, wetting his lip with his tongue. "Sorry. I didn't mean to trip you."
"It's okay. It's a small kitchen," Shawn said breathlessly. He was totally focused on those lips.
Graham tilted his chin, offering, and Shawn leaned in and touched his lips to Graham's. He felt soft, warm lips moving over his own, the friction of stubble against his cheek, and then Graham was opening his mouth—inviting him in. Shawn accepted eagerly. They kissed, hot and wet and messy. Graham pushed against him, making breathy sounds, then pulled away for air before diving back, taking his turn to explore Shawn's mouth.
Posted by Pender Mackie at 5:31 PM