What Would You Say if your Favorite Celeb Was Gay?

I’d like to thank Pender for having me on today. First, let me take you back in time…

American Idol stage. Singer Adam Lambert is a favorite on the show. He knocks the judges dead on some performances on others, not so much. He is the favorite until…
Pictures surface of him kissing another man. They story breaks, people are talking and then Adam gets asked the question: The pictures, are they real, are you GAYYYYY??????
Adam doesn’t deny it and says he’s always been open about his sexuality.

This is before the big vote and then when the final tally is done… He’s the runner up.

I wonder was America not ready for an openly gay superstar! So typical of this culture right? We couldn’t accept him as the winner because he had talent, instead, he lost to someone who looked straight, I suppose. No one had photos of winner, Kris Allen kissing anyone so…

Okay. Let me confess and say, I didn’t really start following Lambert until after he came in second and released his album. Seemingly, much of America did as well and Adam had become a superstar despite his AI loss.

Okay back to the present.

So, what if you favorite celeb came out? Can you accept him or her as an openly gay entertainer?

In some cases, the US has. Ellen Degeneres has her own talk show. Rosie O’Donnell had her own and is still somewhat lauded by the mainstream. Melissa Etheridge, KD Lang, both accepted into mainstream music but do you see a pattern? All lesbians.

Let me preface this by saying I have nothing against lesbians or the celebrities I mentioned. The GLBT community as a whole is still not given the proper respect but, why is it easier for America to accept a gay woman as a celeb than a gay man?

WTF? I’m sorry, just another problem I have with the media in this country and the powers that be that have discriminated against gay men.

We do have a few besides Adam that have broke through…

Anderson Cooper is a journalist on CNN. For a long time, he didn’t discuss his sexuality. Of course, Don Lemon recently came out, another CNN reporter. Lance Bass, former member of N'Sync and Neil Patrick Harris, of course Doogie Howser and now a star on TV.

So there are examples but why is it so much harder for the mainstream to accept a gay man as a celeb? Will we continue to show bias against gay male stars just because we may not agree with their orientation?

In my opinion, I think that’s silly. Can’t people here grow up and begin to accept people for what they have inside? The talent to act, sing, dance, write, whatever without worrying who they sleep with?

This country has a long way to go. The attitudes need to change.

I’ll leave you with a personal example:

My grandma was and is a big fan of Rock Hudson.

When Rock died of AIDS in 1985, more information began to come out about his sexuality. Grandma, being the big fan she was, just couldn’t accept that her favorite star might have been a gay man. Now, my grandmother is very religious so her reasons are more staunch then some but still there’s no excuse why we should hold anyone’s orientation as a strike against them.

If he or she is gay, so what. It is their lives. Why not accept them for who they are?

Thanks to Pender for inviting me to her blog today. For a little Promo, here is my latest novella, Binding Justice in the Bound for Romance anthology 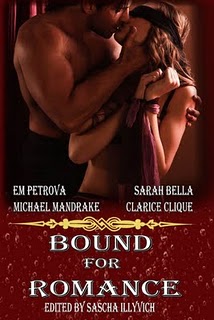 Blurb - Binding Justice, the only gay fiction romance story in the anthology, is a tale of an older man seeking assistance after losing his wife to cancer. Throughout his life, he has had the desire to be with another man but due to his strict upbringing as well as his time in the armed forces, Sire Jacobs has suppressed those feelings. At the insistence of his gay friend Gabe, he decides to attend a party to find someone of whom he can bring this side out. Enter in Jarvis Densley, a twenty three year old gay male, shunned by his parents and looking for someone to mentor and love him.

Apparently, both have similar interests but will Sire's darker desire be what keeps them apart?

Sire felt like an old man amongst so many young people. It had been years since he’d been in a place like this.
I’m only here in support of Gabriel.
He reminded himself of that several times. Sire was pretty sure no one coming through that door would catch his eye. By the looks of things he was spot on since the clientele looked to be exactly what he wasn’t looking for.
Did he even know what kind of man he wanted? A young, strong, and pretty one. Not a drag queen or flamer.
It amazed him he was going over this in his mind as he downed the last of his scotch while still taking in the sights. He never thought he’d get the chance to experience another man.
Still gazing, he noticed Gabe pulling someone’s hand through a crowd. When Sire locked eyes with Gabe, his friend nodded with a smile as the young man with him was turned to the right. After a couple of seconds, Sire got a glimpse of the guy. He was dressed in leather, looking very appealing even from a distance.
Whoa
Sire sat up on his stool, angling his neck trying to get a good look as the twosome threaded through small throngs of people. Before he knew it, Gabe made his way over with a tall, lanky, gentleman with burgundy hair, brown eyes, chiseled features, and a wry smile. He looked a lot like one of the men on the flyer Gabe had earlier; almost the same outfit, his makeup perfect.
His look was just what Sire wanted.
Gabe grinned, “Sire, this is Jarvis Densley. I been talking with him a few minutes about his choice of clothing. He looks a lot like you asked about, right?”
Sire drew up his lips, stroking his beard.
Jarvis Densley, ugly name for a beautiful man.

Bio: The Triad, otherwise known as the characters in the head of Sharita Lira are three separate muses that are the driving force behind her small amount of success. Misses Lira sees her own life as one that is very ordinary, so instead of presenting herself out to the world, she created three personalities that continue to haunt her all hours of the night to get several WIP’s done at the speed of light, and push her to the brink of sheer exhaustion, but she loves it and that’s the reason she hasn’t told them to get the hell out her head.
The Literary Triad - http://www.thelitriad.com/#!
The Literary Triad on FB - https://www.facebook.com/TheLiteraryTriad
Michael Mandrake - http://tabooindeed.blogspot.com
Rawiya - http://rawiyaserotica.blogspot.com
BlMorticia - http://srlmort.livejournal.com/
Twitter - http://twitter.com/#!/rawiyamikembl
Facebook: https://www.facebook.com/AuthorSharitaLira
Goodreads - http://www.goodreads.com/user/show/3542690
Its Raining Men Blog - http://rainingmenamen.blogspot.com
GLBT Bookshelf - http://bookworld.editme.com/The-Triad-Miachael-Mandrake-Rawiya-BLMorticia

Thanks for a thought-provoking post and for stopping by Sharita. With three different muses urging you on, I don't know how you manage. Just reading your bio makes me tired. LOL

Posted by Pender Mackie at 9:23 PM