Today I have Xavier Axelson on my blog and he brought someone with him. 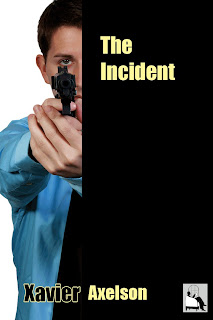 This is your MUSE calling
I’m not going to write as Xavier today, in fact this isn’t Xavier at all.  It’s HIS muse.  Nice to meet you, you should know I bite…hard.  Xavier wants me to let you know that I also don’t play fair or nice.  That’s exactly what he likes most about me.  The luxury of being a muse is exactly this, we don’t HAVE to do or be ANYTHING.  That’s YOUR job writers, artists, painters, sculptors, etc.  You have made contact with us; we have not made contact with you.  Let me give you some pointers; I should say that I have passed these kind words of wisdom onto Xavier and for the most part he abides by my rules, when he doesn’t he gets slapped hard, usually across his occasionally good looking face.
Be kind to your muse; nurture her/him and for fuck sake don’t rape us.  Let us regrow once you have plucked a fruit from the idea tree.  If you don’t let us recharge, regroup and reconnect it won’t be us who is up at 3:00am trying, begging and crying for the next idea to fall into our laps.  We have the ideas.  Well I do, I can’t speak for any other muse, as we are all different, not unlike Cabbage Patch Kids.
Might I suggest a notebook?  Xavier adopted this idea many moons ago and has just recently realized the power of being able to pull one of said notebooks off his over stocked bookshelves and being able to utilize any number of written pages to use for inspiration, blogs, articles, and let me just say, something you wrote ten years ago may just save your overcommitted ass.  Don’t believe me?  Just ask Xavier, who does, most certainly have the uncanny act for over committing.  A quality he shares with Anne Shirley of the fabled Green Gables.  Don’t ask.
You may also find physical activity a tonic to ease an overworked muse.  Physical exertion often clears the mind and like Zeus’s lightning bolt, it can electrify exhausted neurons/electrons and protons, not to mention grey matter.  Try it and see.  I like giving Xavier little bits of pieces of inspiration while he sweats; it keeps him on his toes.  Xavier also finds an occasional (weekly) visits to a spa also soothes a frazzled Muse.
If none of this works, which it may absolutely NOT, might I suggest a good healthy sexual romp, of whatever flavor you so choose.  There are after all so many other flavors besides Vanilla.  Just ask Xavier.
I will turn this over to Mr. X now; he has some promo stuff to get off his chest. So I will let him.
Hey everyone I’ve got a new novella called “The Incident” coming this summer to Seventh Window Publications, be sure and check it out! Feel free to drop by my website and sex advice column over at examiner.com
Thanks Xavier (and your muse too). That's some good advice. I've learned the hard way that a notebook works way better than jotting things down on scraps of paper. I no longer have to turn my house upside down looking for paper napkins and post-it notes. Maybe I'll try the spa idea too. :)


Thanks to both of you for stopping by.
Posted by Pender Mackie at 1:00 AM