I have a special guest today. Lee Brazil’s here and he’s interviewing Mischa from Keeping House. Welcome Lee and Mischa.
Sit Down With Mischa Blake
Hey, readers!  We're here today with Mischa Blake from the recently released Keeping House.  If you haven't read it already you can find it here or here.  He's going to tell us the inside scoop on how his brother Terry managed to land Dex and Trick.
Some might say that you played matchmaker in this story.  Is that true?
I wouldn’t go so far as to say that.  They did meet at my house, I think everyone knows that.  The first time I remember noticing anything in particular between them was at the barbeque we held right before we went to pick up Matthew.  But if you want to accuse anyone of matchmaking, I think it should be our brother Dan.
But, you encouraged them to get together?
Again, I wouldn’t say that.  I invited them to my home at the same time frequently.  I would say I gave them the opportunity to be together.  I thought for sure that Terry was going to fuck it up, too.  Damn it!  You made me cuss.  Twice.  Now I owe fifty cents to the cuss jar.
Uhhuh.  Cuss jar?
Oh please.  Like you don’t’ know what one is?  Donovan and I cuss, a lot.  Well Matthew repeated the words he heard at school, and we had a lovely family conference.  So now, whenever anyone cusses, they have to put a quarter in the cuss jar.
Okay.  So, you gave them the chance to meet at your house.  What about sending Terry off to that particular club?  You don’t think that was pushing things, just a little into the matchmaking realm?
Oh, by then I was doing everyone a favor!  Honestly.  Terry was getting impossible to be around.  He was edgy, grouchy, morose and frantic in rapid turnaround.  I’ve never seen him like that in my life before.  You have to understand, Terry is the most prosaic of guys.  Or at least he was.  He never got excited, never got angry, never went to any extremes.
Were you worried about setting him up with your friends?  Knowing the situation they were in?
Not worried about him.  I knew it would be the best thing for Terry.  He showed more interest in Dex and Trick than he ever showed in any of the women he dated over the years.  I worried about them, yeah.  They’re…fragile.  I guess.  I didn’t want them to be hurt. And I really can’t go into any more of this right, now.  Matthew has soccer practice and it's our turn to provide the treats. 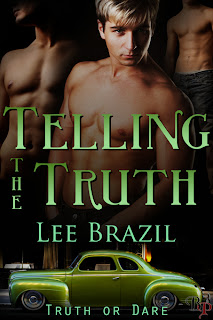 Telling the Truth
Terry Blake loses a hand of cards to his brother Mischa. Payment is Truth, and Terry's honor forces the admission of a deeply held secret.
Terry has lived his life according to the guidelines...studying accounting, getting an MBA and working for the family business. And while handling the family and business finances has its own rewards, Terry has been missing some of the excitement he sees his less inhibited brothers, Mischa and Dan, enjoying.
A losing hand of cards on a Wednesday night gives Terry’s youngest brother the chance he’s been waiting for.   Terry can handle any dare his brother dishes out, but Mischa’s demand for Truth is a different matter.
Terry has a lot of truths he’s hiding - chief among them that he, like his youngest brother, is gay. Unable to hide behind his pristine reputation and fancy business suit, Terry's honor demands he divulge secrets he’s been ashamed to admit even to himself in the privacy of his own bedroom.
The Hyatt twins, Dex and Trick, have finally found acceptance for their relationship in the homes of their friends Bella and Mischa. They would never do anything to upset their new friends, and fooling around with Mischa’s prissy, domineering, oh-so-sexy older brother is completely unacceptable. A one night stand might be ok, and the boys happily indulge, but then close ranks afterward, pushing Terry aside.
Terry isn’t going to take no for an answer. He’s convinced that Dex and Trick are meant to be his, and he’ll do whatever it takes to make them realize all the safety and protection they might need can be found in his arms.
Available from:  https://www.breathlesspress.com/, Amazon and All Romance eBooks
Wow, Lee. Telling the Truth sounds great. I'm sure I'll enjoy it as much as Keeping House.
Thanks to Lee and Mischa for stopping by.
Posted by Pender Mackie at 9:27 AM