Today I have Catriana Sommers on my blog. To celebrate her new release, Catriana's visiting a few blogs today and she's having a giveaway. Those that leave a comment will be entered to win a free e-book copy of Destined. 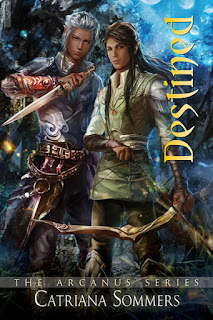 And the Series Just Keeps Growing...
Initially, The Arcanus Series started with 3 books. Then grew to five. With the addition of certain characters, the series jumped up to seven books. In my head, I thought this was perfect, the series would end and all is right with the world.
Then, Ci'hame was born.
In my series, there are four 'demon' - I use the term 'demon' loosely here - Kings, each representing a cardinal point. The Northern King is the oldest, and yet he had no children. I'm not revealing too much to say he does eventually have a child, and her name is Ci'hame.
With her birth, the series went from seven to nine books, with the potential for more. So how does something like this happen? Well, to tell you in this particular case would be too spoiler-ish, but as an author, I can tell you my series grows due to the characters and how involved I end up becoming with them.
Everyone has their methods of expanding their series, how all depends on the focus. For me, I tend to focus heavily on my characters' development, making my flaws lack of environmental description(thank goodness for friends and editors). I conjure up a background for them, motivations and how they could impact the series. Since everyone can't be a main character, most of the people I create are side or secondary characters. Sometimes, however, one stands out more than the others.
In the case of Ci'hame, she popped up into my head and all but demanded I give her the attention she is due as daughter of the Northern King. So now she will have her own adventure, albeit much later in the series.
Hopefully, the series will remain at 9 books, but who knows? Maybe another smaller adventure will emerge. Either way, I do have a few short stories lined up, so The Arcanus Series, isn't going to be ending anytime soon.
Destined is available through Silver Publishing
Buy Link


Blurb: Raised together, Sarnaiel and Naliel are as close as brothers could be, until the dark elf Sarnaiel decides he wants them to be something more. Only after he reveals his intentions does he learn of an arranged marriage that stands between them and their happiness. Unable to stand the idea of the one he loves with another, he vanishes, leaving Naliel alone...or so he thought.

But someone has been watching the young half elf from the shadows, and without Sarnaiel's presence he makes his move in the most brutal of ways. Naliel survives, but his mind and body are broken. Sarnaiel returns to pick up the pieces, mending and nurturing and rebuilding their bond, but once again their relationship is thwarted by the birth of Naliel's bride.

Once the source of his greatest joy, Sarnaiel becomes Naliel's torment. For Sarnaiel, when hurt, strikes back twice as hard and viciously. It doesn’t matter who it is. He almost goes too far and through that, finally learns what should be truly important to him. The oath they make that day is what seals their already unbreakable bond, and the two grow older, and wiser, together. For no matter what happens, no matter what they face, even if it's their own kin, they live by their promise:

"It was us from the beginning, and it'll be us until the end."
Excerpt: The angle of light filtering through the leaves overhead indicated midafternoon by the time they found their prey, a lone male hubrion. Due to the beast's extreme temperamental and territorial nature, these large creatures were normally a hunter's last-resort game. There were typically only two reasons why one would wish to hunt such an animal--desperate starvation, or having something to prove.
Two young elven males, Sarnaiel and Naliel Liunos, happened to be in the latter category. Perched high in the trees, they looked down as the creature grazed the branches to their right. What had started out as a simple conversation amongst peers had turned into a daring bet against the two social outcasts. Pride and egos at stake, the two naturally accepted. Their peers were currently a good distance away, quietly observing in the dense forest.
Naliel frowned thoughtfully, brushing aside his long midnight hair. He reached behind for his bow as the hubrion turned, presenting the perfect angle to hit the vital spot just beneath its jaw.
Something flashed just outside the corner of his eye, distracting him. Naliel turned to his childhood friend, whose fingers moved rapidly in silent communication.
Jumping in one minute. Naliel nodded right as Sarnaiel melted into the shadows of the forest, leaving nothing but a small stream of black smoke in his wake.
Naliel counted the seconds, readied an arrow, and took aim. Enchanted clothing and natural elven abilities kept him from making a single sound and alerting their prey. The creature had yet to change its angle, continuing to chew on fresh leaves, oblivious to its upcoming demise.
At fifty-nine seconds, Naliel shot the first arrow and struck the target dead on. A blood-curdling roar erupted from the beast and three more arrows struck deep, seconds apart. The hubrion swayed, disoriented.
Once the fourth arrow hit, Sarnaiel seemed to emerge out of thin air, flying down through the shadows, wisps of dark smoke trailing from his clothes. He latched onto the creature's long and slender head, gloved fingers digging into rough hide. Before their prey could even contemplate trying to shake this newest annoyance off, two swords appeared in the elf's hands, slicing open the creature's throat. The hubrion flung its head, and Sarnaiel let go, fading back into the shadows.
The beast thrashed weakly, choked attempts at a roar coming from its mangled throat as it drowned in its own blood. Bloodshot orbs rolled to the back of its head as the body fell sideways, dead the moment it hit the ground.
Silence reigned in the forest as Naliel jumped from the perch and made his way towards the creature. Sarnaiel emerged a moment later, a triumphant grin on his handsome face. Turning to the woods, the dark-skinned elf shook blood from his blades before sheathing them. "All right you bastards, pay up!"
Slowly, the rest of the elves came out of hiding, annoyed expressions on most of their faces. However, even they were unable to hide the awe and grudging admiration in their gazes. Two of the golden haired females, Niona and Ralina, glanced at the hunters, impressed and intrigued. They were the only ones to have smiles on their lightly painted lips despite the fact they were out quite a bit of kon.
A blond-haired male, taller and unusually bulky for his race, approached the victors, fixing Sarnaiel with a hard glare. "So you succeeded," Mironel Liunos said.
Crossing his arms over his chest, Sarnaiel raised a pale eyebrow, smirking smugly. "I dare you to claim we cheat now. As you can see, the two of us are better than all of you combined and I assure you, it's all natural skill."
Where to find me: