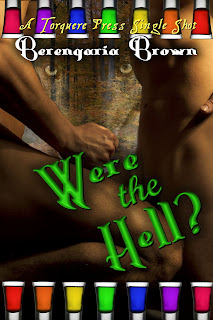 My name is Berengaria and I’m addicted to reading.
My father taught me to read when I was very young, and would never permit anyone to place boundaries on what I read. He always said if I understood what I was reading, there was no sense in preventing me from reading it, and if I didn’t understand it, there was no need to stop me reading it, since I wouldn’t understand it!
Consequently, I read a lot of books children my age had no idea even existed.
He even let me use his library card so I could take books out from the adult shelves at the library. Actually, by then I’d read all the children’s books anyway.
And since I read MM, FF, ménages and everything from sweet to extremely kinky, it’s not surprising that I write across all the genres too. But I do have a special love of MM. Who could resist a couple of yummy werewolves?
“Were the Hell?”
Blurb:
Septimus, is sent to a pack across the country to see if they have a solution to why almost no females have been born into his pack in over 30 years.
As soon as he walks into the meeting room he smells his mate. The lust between them is instant and fierce. By day they try to solve the problem of the gender imbalance, by night they fuck each other's brains out.
Septimus finally gets a lead as to why there may be no females born in his pack. An old man, Arthur, remembers a wizard threatening to curse his pack. Septimus and Arthur speak to a very old woman, Richenda who gives them some trails to follow.
Septimus’ duty is to help his pack. But he’d much rather be in bed with Dai. And is the situation even solvable anyway?
Excerpt PG 13
Septimus had sometimes wondered if he'd only ever been sexually attracted to other males because there were so few younger females in his pack, and the few there were didn't light his fire. But the minute he walked into the meeting room with the weres from the Forest Hill pack, he knew he was genuinely, one hundred percent gay. He could smell his mate.
His cock stood up and fought to get out of his jeans, stretching the fabric so tight that he was going to have blue balls for a week. The tiny hairs on the back of his neck were also standing straight up. His skin tingled, electrified with sexual arousal. And the scent of his mate was overpowering him, dragging him into the room with almost physical force.
His nose led him unerringly to his mate: a tall, lean man of about thirty, with tanned brown skin, dark brown hair, and liquid chocolate eyes. Those eyes were staring at him, the man's strong nose was flared smelling his scent and from the huge bulge in his pale cargo pants, the man was every bit as aware of him as he was of Mr. Tall, Tan, and Delectable.
As Septimus walked across the room, his cock leading the way, the man moved to meet him. Their gazes were locked, and Septimus was totally oblivious to everyone else in the room and the task he'd been sent to do. He was about to put out his hand when the other man reached him and grabbed his shoulders, pulling him in for a hard, body-blending hug.
"I'm Dai. We're mates." The words were harsh, bitten off, said almost as a challenge.
"Septimus. I know."
The Alpha of the Forest Hill pack stood just a few feet away. He coughed, cleared his throat, then said, "Gentlemen, let's get this meeting underway. Dai, you should sit next to Septimus, not in your usual place."
So even the Alpha smelled their attraction. That certainly proved he was not being misled by his cock. Damn! His dick had never been this big before. If only he could undo his jeans and give it some room before it broke his zipper.
Buy Link: http://www.torquerebooks.com/index.php?main_page=product_info&cPath=78_91&products_id=3165
Berengaria Brown
http://berengariasblog.blogspot.com/
http://berengariabrown.webs.com/
Berengaria has over 30 published erotic romance books: MM, FF, ménages, and even two MF stories. Something for every taste!
Thanks for visiting, Berengaria.