My guest today is fellow Silver Flash Fiction writer, Julie Hayes.  Julie's here to celebrate the release of her latest novel, Leonardo di Caprio is a Vampire, which is available as of today, April 30th.

Smile though your heart is aching
Smile even though it's breaking.
When there are clouds in the sky
you'll get by.

Actor/director/composter Charlie Chaplin wrote the music for this song in 1936 for his film Modern Times. The lyrics weren’t added until 1954. In the film, Chaplin’s best known character, the Little Tramp, struggles to survive in a highly industrialized world. Although the film is ostensibly a comedy, it is also a commentary on the life of the common man, and the struggle faced by many people during the Great Depression. Even though by the time that the words were put to the melody, the Little Tramp had made his last film—The Great Dictator, in 1940—the message is one that was always taken to heart and displayed by the character throughout his career, displaying the dichotomy which existed within him. The tragedy within the comedy.
Not only is there a fine line between humor and drama, the same precarious balance exists between love and hate, life and death. And sometimes little to distinguish between them. Yes, Chaplin’s films are comedies, certainly on the surface, but dig a little deeper and what do you find? Much much more. Who can ever forget the scene in The Kid, when the orphaned boy whom the Tramp has taken under his wing and loved and cared for, is being wrenched from his arms? He’s crying, the Tramp’s crying, it’s a heartbreaking moment. Who didn’t cry? I did. Or what about the tender love which the Tramp displayed for the poor flower girl in City Lights? How hard he fought to help her, and how much he loved her, never knowing if that love would be or could be returned?
What am I trying to say? Basically, you can’t have one without the other. Your character does not exist in a world solely composed of all comedy or all drama. all love or all hate. He or she has to have layers because in the real world, people are not one-note wonders. Successful characters need to be much more. You can tell when a character doesn’t work—when his motives are unrealistic or his personality is too wooden. When he’s too perfect to be real. That can be a definite fatal flaw to a story, one that is sure to make us close the book and not bother to finish. Sure, we like to write about our pretty boys, and how wonderful they are. But make them interesting – give them flaws, give them hobbies and interests (outside of sex, please!) Make them human, and make them believable.
Chaplin’s Little Tramp wasn’t necessarily much to look at—with his trademark bowler, tight coat, oversized shoes and cane, but you know what? He was instantly recognizable. Sure, your guy has abs and buns of steel, but so does every other hot hero on the block. Give yours something that makes him stand out in the crowd, in the line that’s vying to get all the readers’ attention. I think this is why vampires have their Achilles’ heels, the rules and regulations they must conform to, because otherwise they’re all powerful and where’s the challenge in that? The reader is going to remember what’s in your hero’s heart and soul a lot longer than what’s in his pants. Also, lots of sex doesn’t necessarily equate to a good story.
If you smile through your pain and sorrow
Smile and maybe tomorrow
You'll see the sun come shining through
For you.
Let’s take this a step further, shall we? If we make it too easy on our heroes, if everything comes easily to them because of their great beauty and gorgeous physique, then what are we reading about? Stories need conflict, so to satisfy the reading public, you have to torture your hero in some way. Give him obstacles to overcome, problems to solve, tragedies to survive. Make him human—even if he isn’t. He’ll thank you for it. After he gets over being mad.
Give them goals, give them dreams, give them something to live for. The path of life can be a rocky road, but it makes for better reading than the story of a person whose life gets handed to them on a silver platter.
In Leonardo di Caprio is a Vampire, Fisher Roberts thinks he has his life laid out pretty well—he has a good job, he co-owns his own home, along with his best friend Hunter Long, he does the things that society says he should, and he’s good to his mother. What more could he want? Maybe to be honest with himself about how he feels about his best friend and about what he really wants out of his life?
His life starts to unravel at Halloween, a holiday that Fisher does not enjoy, but Hunter does. Fisher has promised to attend a Halloween party he has no wish to go to, his job may be in jeopardy, and Hunter is acting stranger than usual. At the party, Fisher learns something that potentially threatens to tear their relationship apartment for good.
And then things proceed to get weird.
Remember to make your characters multi-dimension. Give them personalities beneath their pretty faces. And throw some boulders in their paths when they’re skipping down them. You’ll be glad you did! 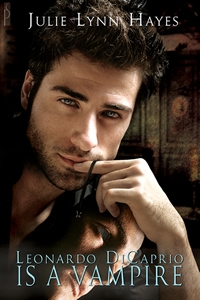 Blurb:
“Tis the night before Halloween, and Fisher Roberts wishes it was over, not being a fan of this or any other holiday.  But he tolerates it because his roommate/best friend Hunter Long takes a childish glee in all things Halloween.  And Fisher has a vested interest in keeping Hunter happy.  If only he could find the nerve to tell his childhood friend that he loves him, and has for a very long time.
Fisher thinks Hunter is carrying things a bit far this year, though.  First Hunter claims to be a vampire, and he just won’t let the silly joke go.  Then he forces Fisher to go to a costumed Halloween party which Fisher would rather avoid, especially when he realizes where it’s being held, and whose house it is. Things at Fisher’s job might just be going south, too, when he receives a mysterious summons to report to the editor’s office the next morning.  And then Fisher goes and does something stupid—like kissing Hunter!
Bad leads to worse when Fisher ends up at the Halloween party from Hell, and he learns something that threatens to destroy his and Hunter’s relationship forever.  Running from his fears, Fisher encounters a strange young man with an unusual resemblance to Leonardo di Caprio, who shows him things he never realized before, truths about his life and the people in it.
Can Fisher find his way back to Hunter, and can he find the courage to do what his heart wishes?
Excerpt
“Did you know that Leonardo di Caprio is a vampire?”
Fisher Roberts stopped in mid-chew of a mouthful of fibrous cereal to cast a wary, disbelieving glance at his best friend and roommate Hunter Long on the other side of the table.  Wary, because he wondered what in the world Hunter was going on about so early in the morning.  Disbelieving, because he only had so much time for breakfast before he had to get going to work, and he had a bad feeling that Hunter was trying to eat into that time.  Why he wanted to do that was beyond Fisher.  Of course, a lot of things about his roommate were beyond Fisher, despite the fact that they’d been friends since they were—well, too young to actually remember how long they’d known each other.  But for as long as Fisher could remember, he and Hunter had been best buddies.  And he’d learned over the years that, with Hunter, longevity did not equate to knowledge-ability, far from it.
Now, Fisher could react in one of two ways.  He could ignore his roommate and keep eating.  Pretend he’d heard nothing.  But from past experience, that would only cause Hunter’s performance to escalate.  Which would entail taking more time to decipher what he was saying, and in the process make Fisher even later to work.   Or he could simply bow down to the inevitable and give in by asking him the question he was doubtless waiting to hear.  Even if it brought about that smug smirk he was so fond of wearing.
Fisher finished chewing, swallowed, and managed not to roll his eyes as he reached for his juice to kill off what was left in the glass.  Waste not, want not.  “What do you mean?”
Hunter Long might be six foot two and possessed of a body that many a male model would kill for—at least that’s what Fisher heard the girls who flocked around him say—with the palest of blue eyes that twinkled all the time, and a smile that could and did light up a room.  But honestly, he had the capacity to be an overgrown child at times, and this was one of those times.  Fisher chalked it up to it being that time of year.
“Well,” Hunter replied, “look at him, going on forty, and he looks just like he did what, fifteen years ago?  It only stands to reason he must be a vampire.  They never age, you know.  I mean take a look at us.  We’re almost his age, but over the years we’ll grow up to be little old men and he’ll still be playing sweet baby-faced guys even when he’s collecting social security, know what I mean?”
“There are no such things as vampires,” Fisher made his typical logical reply, “and just because it’s Halloween tomorrow night, and you’ve got the house all decorated for it, doesn’t mean you have to bring it to the table.  Know what I mean?”  He arched a no-nonsense brow at the other man.  This was not Fisher’s favorite time of year.  Neither was Christmas, come to think of it.  Or any other holiday.  Ironic that he should write articles for a living that meant he was forced to expound on such seasonal topics for Midwest Home and Fantasy, a regional online magazine with a growing fan-base, when he had no real interest in them himself, being a practical, no-nonsense kind of a guy.
“I’m a vampire.” Hunter smiled, leaning across the table toward Fisher.  “Want to see my fangs?”
Buy Link: Leonardo di Caprio is a Vampire


Thanks for being here today Julie, and congratulations on your new release.
Posted by Pender Mackie at 8:17 AM