Now that I have a blog I decided to make good on all my promises to Ryssa Edwards and actually write a flash fic as part of the Silver Flashers.  I actually made it in time for this week's flash.

The prompt for this week was, "I've got a bad feeling about it this time."

Email ThisBlogThis!Share to TwitterShare to FacebookShare to Pinterest
Links to this post
Labels: Andy, Free read, Silver Flash, Tanner, You Know You Want To

I've made the move from writer to published writer — well almost.

On April 9th, less than seven weeks from now, my story Scent of Attraction will be released by Silver Publishing. I'm so excited I can hardly stand it. In fact, I've been having trouble sleeping ever since Silver accepted my manuscript. It's only gotten worse since their wonderful Art Director, Reese Dante sent me the cover image. Isn't it lovely? 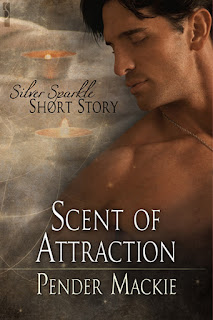 Somehow seeing my name displayed across a half-naked man's chest makes it all the more real. Actually he might be totally naked since his lower half isn't in the photo. Hmm.

Since Scent of Attraction is a short story — about 13,000 words — I don't get my own one-of-a-kind cover. Reese's covers are so beautiful though that I'm inspired to polish and submit one of my other stories. That way maybe I might get a cover made just for me.

There's plenty of fish in the sea. So why is Shawn still thinking about the one that got away?

When Shawn takes a job at a cologne counter in a busy department store he hopes it’s the beginning of a successful career in the health and beauty industry.

But almost two years later Shawn is frustrated with his job and his love life.  He’s still working the cologne counter, still single and still spending every night alone.

His job allows him to meet plenty of good-looking men but most of them are straight, and even when they aren't, Shawn is shy. He gets nervous and tongue-tied when he’s around a hot guy and the thought of going on a date with a complete stranger makes his stomach churn nervously.

When he meets friendly and outgoing Graham, the attraction on both sides is intense and immediate.

Shawn might be willing to step out of his comfort zone this time but there’s just one problem. Graham's already with someone else.

Is their relationship over before they even share a kiss?
Posted by Pender Mackie at 8:00 PM 3 comments